Self-Driving Uber Is Here: But Are We Ready for Driverless Cars?

We’ve had decades of earnest attempts to invent a vehicle that’s smart enough to drive itself. Now, self-driving Uber cars are hitting the road in steadily rising numbers.

The journey to driverless cars took us nearly 100 years. In 1926 Houdina Radio Control devised a car steered by radio signals and directional motors. Hailed as the “Phantom Car” and the “American Wonder,” it briefly cruised the streets of Milwaukee and New York City.

The next big milestone occurred in the 1950s, as radio signals gave way to electrical circuits. RCA Labs installed two prototypes for guided highway systems: One in Lincoln, Nebraska and the other in Princeton, New Jersey. The sensors lying beneath the asphalt could detect cars, their speed, and their location to guide them safely. But only if they were made of metal, Doc Quigg from Oxnard, California’s Post Courier wryly noted in 1960.

“RCA engineers admitted that a herd of cattle would not be detected,” he wrote. “Unless they were dressed in armor.” He bravely got in the contraption, and said it “performed just fine.” Well, except for when the demonstrator had to flip a switch to keep them from flying off a blind curve.

Meanwhile, in 1956 General Motors bet the farm on this precursor to the self-driving Uber and rolled out their Firebird II.

This jet turbine-powered, futuristic wonder didn’t just look cool. Its built-in sensors actually worked on the roadways RCA Labs had prepared. GM even produced a video that extolled a vision of the future only now coming to pass. In it, a family relaxes in their guided car while getting directions, traffic advice, along with options for hotels and grabbing a bite to eat from a traffic controller in a tower. And best of all, there’s a dispenser for ice cream and cold drinks in the glove compartment.

Here’s the video with 1956’s version of the self-driving Uber.

Research on road-based paths and navigation signal transmissions continued throughout the 1960s. But when the scheme of encoded roads was abandoned in the 1970s, true smart car design began. The new shift towards artificial intelligence planted the seeds for self-driving Uber and other driverless cars.

The Road to Driverless Cars

First, Chrysler’s 1958 Imperial rolled out cruise control so drivers could take their foot off the pedal. Then, in 1971, they introduced the first Anti-Lock Braking Systems (ABS) for cars (airplanes had it since 1929).

Then came the”Stanford Cart’ in the 1960s and 1970s. At first, the team had a remote-controlled moon rover in mind. It had a TV camera that swiveled and gathered 10-15 minutes worth of video footage every three yards. The Stanford Cart then processed the data so it could move without bumping into things without help from a human being. In 1979, the Stanford Cart made history as it drove itself through a room and navigated around five chairs all by itself. 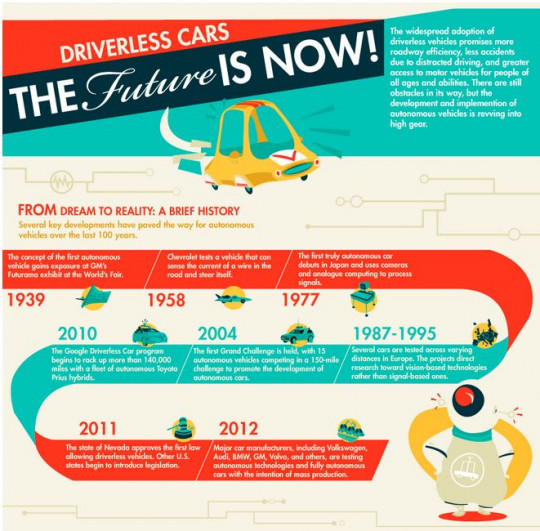 In the late 1970s-80s, more advanced autonomous cars hit the road. Mercedes Benz came out with a van that used “4D Vision” to process video footage and operate the car, even while driving at about 60 miles per hour.

But driverless cars really started to take off after 2004, when DARPA launched their Grand Challenge … $1 million would go to the team whose unmanned vehicle could navigate an obstacle course. No one won that year but in 2005, five driverless cars met with success.

Self-Driving Uber’s Not the Only Game in Town

Self-driving Uber’s been making headlines lately. But it’s worth noting they’re far from being the only game in town. Tesla, Nvidia, Nissan, Lyft, and a host of others are also big players in the autonomous car game. Google Maps made the search giant’s Self-Driving Car Project (now Waymo) an early contender. People in Silicon Valley have been excitedly tweeting about these driverless car sightings for years.

Self-driving Uber’s made a name for itself and we’re seeing it a lot in the news lately. Unfortunately for them, not all the news is good.

For starters, their rival Waymo’s suing Uber for stealing their intellectual property. They claim a top engineer who left Waymo for Uber stole 14,000 confidential files on the way out. At first things looked good for Uber. A skeptical judge even ordered Waymo to slash their 120 trade secret claims down to nine. The trial was scheduled for December in San Francisco, but now it’s likely to drag out a lot longer. Reuters reports U.S. District Judge William Alsup delayed the trial after Waymo presented some damaging new evidence. But even if this tanks Uber’s big pre-IPO stock sale to Japan’s SoftBank Group Corp., the autonomous cars are likely to stay on the road.

Self-Driving Uber also may have worn out its welcome in Pittburgh. At first, people in this former Rust Belt City were eager to host their driverless car experiment. Too eager, perhaps. CNBC reports Uber hasn’t delivered on its promises and Mayor Bill Peduto didn’t get anything in writing.

“You can either put up red tape or roll out the red carpet,” he announced back in September. “If you want to be a 21st-century laboratory for technology, you put out the carpet.” For starters, they’re charging for driverless rides they said would initially be free. The City also says Uber’s failed to deliver the jobs promised or shared their traffic data with the city. Worst of all, Uber withdrew their support for a $50 million federal grant to upgrade the city’s transportation system.

Pittsburgh’s weather, layout, terrain, and size makes it an ideal testing ground for self-driving Uber. So does the presence of Carnegie Mellon University’s famed Robotics Test Lab. The Verge reports Uber’s and CMU’s partnership seemed like a match in heaven … And then, Uber started poaching CMU’s engineers.

Anyone who’s ever driven the Nonsensical Roads of Pittsburgh would agree their city’s perfect for this. Over 30,000 people have taken self-driving Uber trips, traveling over a million miles.

Other cities’ eyes are on Pittsburgh, Tempe, and San Francisco

As Lyft, Waymo, and others roll out driverless car programs, cities across the U.S. are looking hard at Uber.

The company’s also testing their robo-cars in San Francisco and in Tempe Arizona. There, a self-driving Uber vehicle was involved in a crash back in March. Then it happened again in September. No one was hurt in either crash and in both cases, police said the autonomous cars were not at fault. However, these crashes prove logic and algorithms can only take a car so far.

Meanwhile, San Francisco’s having more problems with the human drivers than with the unmanned vehicles. In June, Mayor Ed Lee told CBS Uber drivers aren’t following the rules. “There’s too many reports about double parking, picking up people in the wrong places, compromising bike paths and bike lanes,” he said. Still, the cars are so roundly hated by locals, their third quarter numbers for 2017 took a dive.

No matter what happens to Uber, we can expect to see more driverless cars in our future. But this doesn’t mean human drivers are going away. There are some things only human drivers can do … Like take shortcuts, discuss local attractions, and other human-centric intangibles. Uber’s latest market research said as much, and this is why they’ve also introduced UberSELECT. This new option fills the medium-priced demand gap. Priced less than the premium UberBlack options, you can expect a spacious sedan or SUV ride with a 21+ driver. This lets you ride comfortably in an Audi, BMW, Cadillac, Infiniti, Tesla or Lexus without breaking the bank. With Uber’s self-driving taxi fleet rolling out in  2019, all we need is a way for cars to flip the bird and growl, “You lookin’ at me?”

Is Emergent Artificial Intelligence a Threat? Maybe, but Not Like You Think

Flying Towards the Singularity: Artificial Intelligence and Its Role in the Future